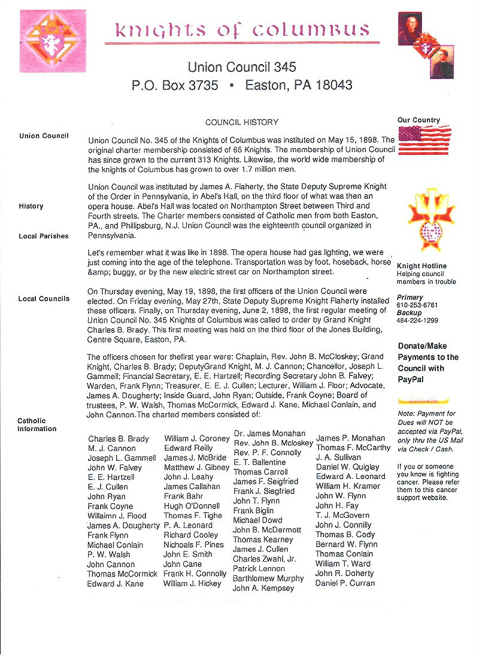 Union Council was instituted by James A. Flaherty, the State Deputy Supreme Knight of the Order in Pennsylvania, in Abel's Hall, on the third floor of what was then an opera house. Abel's Hall was located on Northampton Street between Third and Fourth streets. The Charter members consisted of Catholic men from both Easton, PA., and Phillipsburg, N.J. Union Council was the eighteenth council organized in Pennsylvania.

Let's remember what it was like in 1898. The opera house had gas lighting, we were just coming into the age of the telephone. Transportation was by foot, horseback, horse & buggy, or by the new electric street car on Northampton street.

Careful of the caliber of its membership, Union Council experienced a healthy growth, loyal to the ideals of the Order. It became a force in the religious, social, and civic life of the community. On November 10, 1899, the council had grown to such proportions that the Pennsylvania and New Jersey members decided to separate. The Phillipsburg members reorganized as Warren Council No. 474, and the Easton members continued as Union Council No. 345. In 1905, the Council was signally honored by the appointment of Past grand Knight Thomas F. McCarthy as District Deputy of the Ninth Pennsylvania District. Brother McCarthy held this office from 1905 to 1909. Brother Knights of the Union Council, James B. Pendergast, Felix J. Hammerstone and P. Charlie Katz likewise were elected to the post of District Deputy.

Seventy members of the Union Council served with the armed forces of the nation during the First World War. At home, the Council, under the inspiring leadership of its Chaplain, Rev. John E. McCann, enthusiastically supported the Federal Government in every move that had for its purpose the winning of the war. On its twenty-first birthday, Union Council had an elaborate banquet at Selp's Cafe. Two hundred and fifty Knights, and their ladies, including 50 former servicemen, gathered around the festive board.

In 1919, during the administration of Grand Knight John J. Cunningham, the long-cherished desire for a permanent Council Home became a reality. A charter was granted by the Northampton County Courts incorporating & quot; The Knights of Columbus Home Association of Easton, Pa.& quot; On June 24, 1919, at a special meeting, the purchase of the three story house at 7th and Lehigh streets which served the Council for ninety years, was proposed by Grand Knight John J. Cunningham. This project was endorsed, option was taken on the property on July 15, 1919, and title was secured on October 15, 1919.

The home was officially opened on New Year’s Day, 1920. It was furnished and altered to meet the needs of the Council. The first regular meeting of the Home Association was held on September 30, 1919.

During its ownership by the Council, the home has served as a center of Catholic social and intellectual life. Various additions and improvements have been made to the home since its purchase in 1919. The heating system of the home was updated through the efforts of Brothers Robert Hale, P. Charles Katz, Albert Giouvanni, Thomas Rafferty and many others.

The Council Home was also utilized by the community in times of celebration, need, or great catastrophe's. During the flood of 1955, the Home was used as a temporary housing for those displaced by rising flood waters. It is the Knights intention of continuing this commitment to the service of the needs of the community.

At the beginning of the second hundred years, Union Council is an active and vibrant group of Catholic men dedicated to the principals of charity, patriotism and service to the Church. family and community. Brother Knights are active in the many activities for the benefit of the less fortunate of the community. One such activity is providing financial support to the Pennsylvania Association of Retarded Citizens (PARC). Brother Knights also contributed time and money to the creation and funding of Notre Dame High School in Bethlehem Township. The Brother Knights look forward with zeal and enthusiasm to the challenges and opportunities that the next century offers.